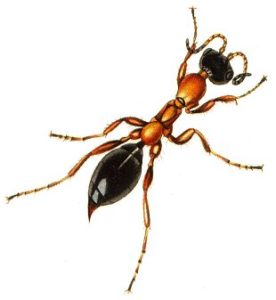 Body slender and antlike, ranging from 3.5 to 9.0mm, with a modal length of about 6.0mm, a shining habitus, usually impunctate or microscopically punctured, with smooth and reflecting interspaces and sparse pubescence.

Metasoma (= the visible abdomen, apart from the propodeum) with six visible terga (= T-I, T-II, etc.), with a constriction between the first and the second tergum, better visible in sternal view.

The species was established on four small females (3.75-5mm), with hirsute habitus, abundant white hair, overall abundant shallow punctuation; head and metasoma shining black, but, at least in some areas, with rugulosity; clypeus without any tubercle; antennae reddish with pedicel and apical 5-6 flagellomeres darker; mesosoma dull red with propodeal spiracles obscured by rugulosity.

In comparison to the original description (Guichard, 1972), the latronum female from Sardinia (Italy) shows a bigger size (6.5 mm) and a completely mat habitus, without shining reflections.

Compared to the articulata females, the Sardinian female is clearly opaque, with matte, sculptured and densely pubescent teguments; the punctuation on the head vertex  shows an average diameter which is double, and it is denser: the single points are interspaced by sculptured areas, rather than the typical smooth ones. The pubescence on the head is longer and denser than in articulata, measuring in latronum up to 4.5 MOD.

The diameter of the punctures on the mesosoma is 1.6 to 2.5 times wider in latronum than in articulata, measuring in the former up to 1.0 MOD, with the pubescence up to 3.7 MOD. The pronotum of latronum  shows a deep median depression, wide 1.8 MOD and long 3/4 of the pronotum length; except for the central mesothorax, the interspaces on the rest of the mesosoma are striped and irregularly grooved, not as smooth as in articulata. In both species the punctuation of the metasoma is finer than on the remainder of the body and the respective diameters are not significantly different (0.2-0.4 MOD); however, only few sparse points are visible in articulata and the metasoma appears nearly polished and glabrous, whereas in latronum  the points per area are fairly denser, the associated pubescence is dense and long (up to 4.3 MOD) and the interspaces are finely striped with an irregular trend, both on terga and on sterna.

All text and images are copyright ©️ Chrysis.net unless otherwise stated - please see individual cases for authorship and copyright details. The specimens pictured are from the authors' or other collaborators' personal collections and from the collections of various museums. Unless otherwise specified, the whole content of this web site is for personal, non-commercial, scientific, and educational purposes given proper accreditation to the page from which they were derived are provided, and under Chrysis.net Terms and Conditions.