Chrysidids (Hymenoptera Chrysididae) are Apocrita wasps characterized by a colorful habit with metallic glares (thus the common local names Gold wasps, Goldwespen, Guêpes dorées, Vespe dorate). Although belonging to the group of the Aculeate wasps – considered obsolete nowadays – Chrysidids present a reduction of the stinging apparatus to an internal telescopic apparatus: the ovipositor in females and the genital tube in males.

Biology. Chrysidids are parasitoids and cleptoparasites of other insects (mainly other wasps), from which the name of Cuckoo wasps.

As far as the morphology is concerned, Chrysidids differ from the other Aculeate wasps for the reduction of the number of the external abdominal segments, for the presence of 11 antennal articles and for the wing veins with 5 closed cells. Some tropical species have apterous females and a body without metallic reflections.

The shining coloration made of iridescent blue, green, purple is an interference coloration, while true pigments (red, brown and white) are very rare. The typical brilliance is emphasized by the exoskeleton sculpture, which is carved by a complex punctuation and by projections, crests, holes from micrometric to millimetric size.

The species of the subfamily Chrysidinae have the ability to roll up in a defensive position when disturbed. Legs and antennae are folded into special grooves and depressions of the face and of the thorax and the thorax is then folded on the abdomen, thanks to the concave shape of the gaster. This way the chrysidid defends itself in a nearly spherical shape in which the delicate appendages are protected and there’s no space for the sting of their host wasps. 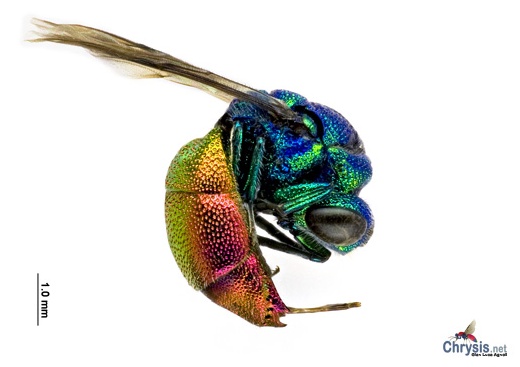 Female of Chrysis ignita-group in a rolled-up defensive position.

Currently about 3,000 species have been described in the entire world, distributed in 83 Genera and in 5 subfamilies, according to Kimsey & Bohart (1991) and some other recent papers. Among those species, about 250 taxa are known in Italy. Chrysidids are distributed all over the world, but southern Asia, Africa and Middle East have not yet been explored systematically. As for each systematic group in nature, other hundreds of unknown species are expected to be described.