With some exceptions, Chrysidids are generally colored and their structural coloration is due to light interference, and it varies with the viewing angle.

Many species are characterized by colors with metallic glares, green, blue, copper, gold, etc., and some colorations seem to be typical of precise geographic regions. 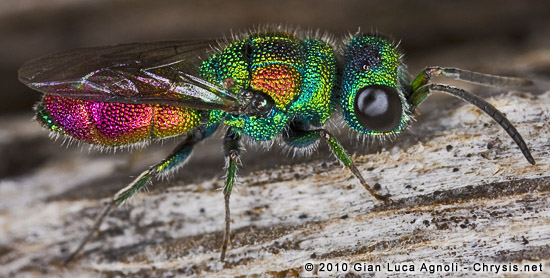 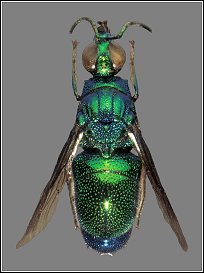 The Loboscelidiini and the Allocoeliini lack any metallic coloration; their colors are brown, black, reddish and, in the some cases, white.

The Amisegini are generally from brown to black, with little metallic glares from green to blue on face and thorax; the abdomen is generally non-metallic (metallic in Duckeia).

The coloration of the Cleptini is very variable. Some species are completely non-metallic black. Cleptes species are generally metallic on head and thorax, the abdomen being non-metallic. Typical of almost all the European Cleptes is the metallic color of the head and of the thorax (mainly red in females and green-blue in males), with a non- or not completely metallic abdomen.

The Chrysidini and the Elampini are always colored with metallic colors. In Europe the commonest colors are the green-blue on head and thorax, with a copper or golden abdomen. The species of southern Spain, N Africa and Middle East tend to be completely copper- or brass-colored. In tropical Asia we observe the diffusion of a pattern with green body and a copper-colored spot on both sides of the second abdominal tergite in species belonging to even distant Genera (the reason is unknown), while in the Philippines Chrysidids are purple with a red-shining head. Some Hedychridium show a reddish non-metallic abdomen.

In Parnopes a clean chromatic distinction based on the geographic distribution is observed. The African and American species tend to be colored of uniform blue, green, purple. In the palearctic species, instead, the abdomen is often different from the rest of the body and generally non-metallic.

White colorations are generally reduced to spots and stripes on mandibles, antennal articles, tegulae, legs, abdominal tergites; in the species of the Loboscelidiini and the Elampini they are not observed.