The Chrysidid collection can be carried out on the field through traps (Malaise and yellow dishes) or through sight-hunting with a butterfly net (aluminum handle, nylon net bag).

Malaise trap. This trap consists of a kind of Canadian tent, dark in color, with a vertical wall in the middle which prevents the flying wasps to pass through by forcing them to fly upward. On the corner top of the tent there’s a hole which lets the daily light filter through and attracts the wasps which are flying in the direction of the light in order to escape. The hole brings a transparent plastic tube which ends into a large bottle containing a preserving liquid (75% alcohol + water), where the wasps will fall. Malaise trap is cumbersome and needs to be set on the flying routes of the wasps. For this reason, the trap is advisable for areas where it won’t attract the attention of too curious people. You need to control the collecting bottle every week, depending on many factors. However, Malaise trap is a massive collecting method, which won’t sample only the wasps you are looking for, but everything is flying there, unconditionally.

Moericke traps (or “yellow pan traps”). You simply need the ordinary plastic dishes used for pic-nic already colored or painted of intense yellow color (we suggest the spray acrylic enamel) and positioned close to the flying routes of the Chrysidids: rocks, paths, wood-piles, seasoned bushes. Once positioned, the plates need to be filled up with a mixture of three elements: water (in order to make the wasp drown), soap (in order to break off the surficial tension of the water and preventing the floating of the wasp) and salt (in order to preserve the specimens for some days). Salt is a good preserving mineral, but it will make the colors of the wasps “opaque” in case of long-lasting permanence; therfore it is important to control the content of the dishes periodically. The meaning of the yellow color comes from the fact that many flying insects orient toward the flowers through visual indications. The yellow color is one of the best colors to attract insects. Yellow is also the wavelength reflected by young leaves. 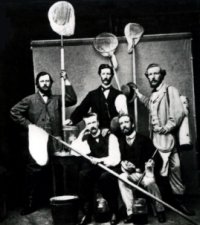 Sight-hunting. Flowers, rocks, walls, woods, wood-piles, hollow branches, sandy soils inhabited by other wasps/bees, dry walls, palissades, wood stakes, etc. Chrysidids rest generally for few second on these places and then they fly quickly to the next place, usually following an invisible route, probably chemically marked and generally constant. It is not difficult to scare a specimen and, remaining in wait, see it rest again after few minutes on the same point or on the same path. You need to pay attention to your position regarding the sun and the shadow when you approach the resting place of the wasps. Sometimes, when you shot your net on a specimen resting on a wall or on wood, you will see the wasp remain motionless or point to escape under the edge of the net; in these cases you have to “convince” the wasp to fly upwards in the bag. Once the wasp is in the bag, you have to push it in your bottle containing the mortal agent, carrying the bottle inside the bag. The liquid generally used to kill the chrysidids – and all the other insects – is the ethylacetate (EtOAc). We generally use a glass or poliethylene (PP) killing jar with an hermethic cap and a cotton bottom containing some drops of etylacetate (its vapors kills the specimens). Ethyl acetate is toxic when used, so avoid ingestion, inhalation and contact. As an alternative to ethylacetate you can use ammonia (NH3).

An alternative collection method consists in the breeding of nests made by other wasps, from which chrysidids could emerge as hosts. Examples of nests could be the mud cells of Sphecids and of Eumenids, or the Cynipid galls housed by secondary hosts (Sphecids of the genus Pemphredon), or the hollow and dried branches used by many Sphecids and Apoids. Consequently this method allows you to reach a deeper knowledge on Chrysidid relationships with hosts.