The HEAD is hypognathous, so the mouth apparatus is turned downwards. Two composed eyes and three simple ocelli are present, on the vertex. The space between the base of the eyes and the articulation of the jaws is the malar space, of taxonomic importance. The antennae are inserted little above the jaws, in correspondence of the upper part of the clypeus: here are the scape, the pedicel and 11 flagellomeres (F-1, F-2, etc.), generally cylindrical. The relative length of the first 3 flagellomeres is of diagnostic importance. The clypeus is generally short and wide, except for the Stilbum Genus. The jaws are simple and are armed with 0-3 apical teeth. The central part of the face is occupied by a depression (scapal basin) able to receive the antennas in a folded position. The upper part of the face is the forehead, often characterized by a crossing carina projecting behind to the area of the ocelli (vertex).

The THORAX is subdivided into 5 articulate segments: pronoto, mesonotum (scutum), scutellum, metanotum (postscutellum) and propodeum. The surficial sculpture can be absent (smooth teguments) or intense (punctuation, drills, carinas). To the pronotum, comprising the neck, articulates the first pair of legs. The mesonotum (scutum) is characterized by 3 regions (two lateral and one central = mesoscutum or medium mesonotum separated by notauli and laterally by the 2 tegulae that cover the wing articulation. The scutellum is generally shorter than the scutum. The metanotum can be characterized by a projection (Elampus, Parnopes), or can be fused with the propodeum; it is often characterized by the presence of lateral metathoracic teeth. The propodeum, precisely the first gastral segment, is generally vertical and lacks an upper flat face; it’s also characterized by two lateral teeth. The legs are generally adapted for an excavating activity. The segments that compose the legs are the hip (coxa), the femur, the tibia and the tarsus. The terminal part of the tarsus is armed with dentate nails.

In modern hymenopterological nomenclature the terms mesosoma and metasoma are used instead of thorax and abdomen, respectively. The reason is that the first abdominal segment (propodeum) is joint with the morphological thorax and the famous “wasp-waist” articulates two abdominal segments and not the thorax to the abdomen.

When measuring morphological characters under a microscope, the following measures are used:

MOD, the Diameter of the Median Ocellus. This quantity is used as the unit for all the other measures taken on a given specimen, which become relative measures (eg. 2.0 MOD, 4.5 MOD, etc.) instead of absolute measures (eg. 3 millimeters). If measures are expressed in MOD units, and since the Diameter of the Median Ocellus is proportional to the size of the specimen, you can compare the same measures obtained on different specimens in order to draw average values and other statistics.

PD (Puncture Diameter), the diameter of the punctuation on a given area, eg. on the pronotum, on the T-2, etc. 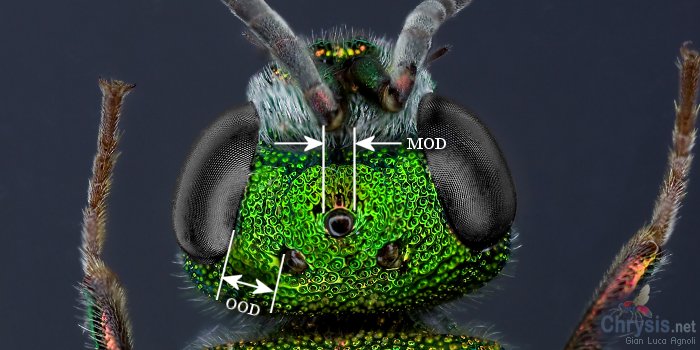 All the micrographs were taken with a JEOL JSM-5400 Scanning Electron Microscope, after a vacuum ionization of the dried specimen (Chrysis scutellaris) with gold (JVG-N1 Gauge and JEE-4B Evaporator).