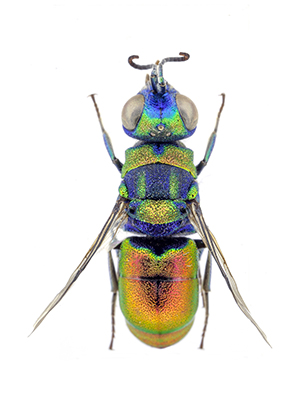 Spinolia is distributed throughout Europe, Africa north of the Sahara, and in the Middle East. However, the centre of diversity is in the southern USSR.

The most distinctive features of Spinolia are the U-shaped projection on the lower mesopleuron, finely denticulate to dentate margin of T-III, dentate ovipositor segments, and the frons with two large round, flattened and usually striate areas; particularly in males. These characteristics immediately separate Spinolia from its closest relatives, Euchroeus and Pseudochrysis. Most Spinolia have the apical margin of T-III finely denticulate or crenulate, but stchurovskyi has multiple, large, irregular teeth. As in Pseudochrysis, the basic colour pattern is a dark blue to purple, as exemplified by algira. However, bright markings on the thoracic dorsum are common, and useful for distinguishing species. In dournovi the vertex and the entire dorsum of the thorax are coppery. In insignis the pronotum, scutum, and scutellum are coppery except for the area between the notauli. A similar pattern occurs in lamprosoma, although the markings are bright green and the scutum is dark except for green bands along the notauli. Spinolia stchurwskyi is quite differently coloured, the body is basically magenta or reddish purple, with bright green tints on the thorax. This genus was reviewed for Europe by Linsenmaier (1959a).