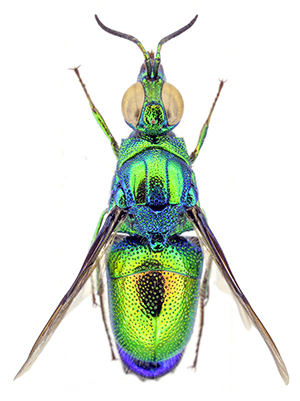 This genus is widespread in the warmer parts of the Old World, occurring throughout Africa, the southern Palearctic, Oriental, and Australian Regions.

Variability in the colour of the widespread cyanurum has led to the proliferation of species and subspecies names. Linsenmaier (1959) listed six species and eight sub-species, whereas we prefer to treat just three species. In general we agree with Zimmermann (1937), who placed all names under two species, cyanurm and viride. We are recognizing a third species, chrysocephalum, from the Philippines. The colour range of cyanurum is considerable, from green to blue to coppery or coppery-red and blue (calens colour form). However, colour pattern does seem to have some species significance. As Linsenmaier (1959) pointed out, viride is unique in having T-III (although coppery tinged) the same green base colour as T-I-II. In other Stilbum, with rare exceptions, the base colour of T-III is a darker blue to purple than that of T-I-II. In chrysocephalum the frons, gena, and vertex are coppery red in contrast to the green-blue-purple of the rest of the body. Also, in the last species the mid ocellar area is less elevated than in the other two, and only irregularly welted below rather than carinate. The great size differences observed in Stilbum presumably relate to host size. An apparent relationship between Stilbum and Stilbichrysis is discussed under that genus.