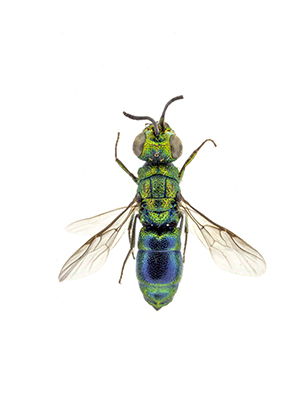 Trichrysis has frequently been confused with other genera, some of whose species may have a tridentate T-III. This confusion especially concerns the New World genus Caenochrysis. Linsenmaier (1984) described 32 new species from South America in Trichrysis and one of these (rossi) with mistaken locality is an Asian form. Trichrysis differs in several respects from Caenochrysis. The sublateral facial pits of the latter are an immediate separation point. In addition, Trichrysis always has three denticles or teeth on T-III although the middle one may be tiny in males, S-II spots are medial, and the metanotum is simple. All of these last features are variable in Caenochrysis. Other genera with one or more tridentate species are Allochrysis, Chrysidea, Odontochrydium, and Primeuchroeus, differences from Trichrysis are discussed under those genera. Of the 26 listed species, we have been able to study types or other authenticated specimens of 23. We are not familiar with coreana, purpuripyga, or sudai, and some additional synonymy may be in order. The genus exhibits considerable morphological diversity, especially in the pronotal shape, but the differences between species are rather gradual and do not lend themselves to the formation of species groups. Most species have the pronotum markedly concave laterally in dorsal view, and with a continuous sublateral carina; examples are cyanea, triacantha, and buyssoni. A few species, such as trigona, eardleyi, and hexapholis have the concavity but the carina is broken medially. Other species with a slight concavity and no carina are polinierii, heliophila, and impressifrons. In some species, such as buyssoni, there may be a sharp medial pronotal groove, but in others, as in impressifrons, hardly any groove. TFC is most often a small, obtuse inverted V. In buyssoni, eardleyi, and excisifrons TFC is continued almost to the ocular margin. In vestigator it has backward branches which delimit a mid ocellar area. In many species the brow is quite sharp and looks like a second TFC a little below the first. TFC is absent in bohemanni and obsolescent in heliophila. The only two species we have seen with a long malar space (3.5 MOD) are lomboldti and impressifrons. Most species have the fore wing discoidal cell complete even though the outer veins may be narrow. However, in bohemanni both outer veins are quite faint. The shape of the apical teeth on T-III is an important taxonomic character. In cyanea the medial one is a denticle and the outer ones simply angles. In bohemanni all three are denticles. At the other extreme, as in hexapholis, the teeth are long and sharp. Bohart (1988) gave a key to species, and described several new ones.