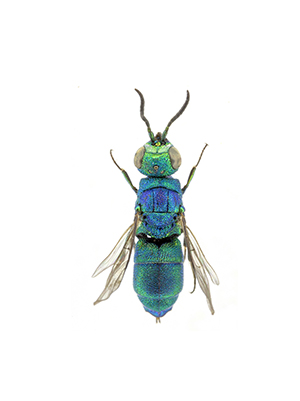 Members of this genus parasitize various Sphecidae. Zimmermann (1961b) reported Trypoxylon and Pison as hosts of dido and agnata, and Sceliphron madecassum Grib. and S. hemipterum F. as hosts of bellula.

One species, pumila, is widespread in the south-western Palearctic and in the continental Afrotropical Region. Otherwise, there are two other Palearctic species, three Oriental species, and 13 in Madagascar (one of these, pumiloides, is found rarely in Continental Africa as well).

Typical Chrysidea, as exemplified by pumila, has the discoidal cell with faint outer veins, a semicircular TFC over a rather deep scapal hollow, a broad light-reflecting area above TFC, T- III apex laterally dentate but medially convex or slightly indented, and well-separated S-II spots. There is considerable morphological diversity among the Madagascan species. Here, the fore wing discoidal cell is complete in agnata and bellula, whereas the outer veins, and particularly the anterior one, are weak or obsolete in the other species. The T-III apex is normally convex medially except in dido and phoebe, which have a medial denticle. In zimmermanni the metanotum is prolonged into a point posteriorly. In bicallosa the scutum is humped over the tegula, and in bucculenta the malar space is as long as F-I, contrary to the usual short space. There seems to be a rather close relationship to Trichrysis, at least between dido and phoebe, with their tridentate T-III, and those Trichrysis species, such as polinierii, in which the pronotum is sublaterally ecarinate. However, the apically bilobate gonocoxa of Chrysidea is quite different from the condition seen in Trichrysis. Zimmermann (1956, 196lb) contributed more than any other person to our knowledge of the genus. Most previous authors had placed the species in Chrysis or Chrysogona. Zimmermann followed the lead of Bischoff, who described Chrysidea, and listed the generic characters based largely on a study of the Madagascan fauna. However, Zimmermann put agnata and bellula in Chrysis (Dichrysis) because of the complete fore wing discoidal cell. All other features of the two species are those of typical Chrysidea, as pointed out by Bohart (1988c). In the Palearctic Fauna persica is close to pumila, but the gonocoxa of the former has only a strongly rounded outer apical edge in addition to the distal projection, instead of a notched apex. We have studied European and African specimens which indicate that only the widespread pumila is involved in Africa. We have been able to examine most of the primary types of the 19 species listed, except those of agnata, monticellii, persica, and pumila.