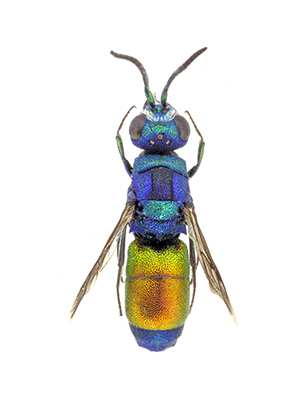 The genus Chrysis has about 1000 currently recognized species and is as large as all of the rest of the Chrysididae together. Along with the size of the genus there is a great amount of variation. Chrysis is best defined by a combination of numerous, non-exclusive characters, many of which are found throughout the genus. For instance, all Chrysis have the fore wing marginal cell attenuate and, if extended by creases, terminating on the front wing margin. Also, there is no well-defined median tooth on the distal margin of T-III as found in Pentachrysis, Praestochrysis, Allochrysis, Odontochrydium, and some Trichrysis and Primeuchroeus. However, a tiny median projection may occur in Chrysis oxygona, catagrapha, and several other species. So, even this ‘absence’ character is nor absolute!

A character summary for a common and rather widespread species in the largest species group will give a basis for understanding the genus. Chrysis ignita might be considered ‘typical’ of the genus. The fact that it is also the generotype is coincidental.

In ignita the flagellum is dark, flagellomeres are cylindrical, and F-I is longer than F-I1 or F-III in both sexes. The antennal bases are well separated and the subantennal space is about 1 MOD. The scapal basin is not, or hardly, microridged. The malar space is more than 1 MOD. TFC is distinct, somewhat biconvex, and without posterior branches. Ocelli are well removed from the compound eyes and not lidded. LID is about 1.5 times the breadth of one eye. The genal carina is about 0.7 MOD from the eye at its closest point. On the underside of the head the preoccipital ridge and hook are present.

The notum is closely covered with moderate punctures. The pronotum has moderate humeri (shoulders) and no sublateral carina; median length of the posterior raised area is about that of the scutellum. The mesopleuron is rather smoothly rounded, edentate, and bears a distinct scrobal sulcus. The fore wing discoidal cell has well-developed veins. Legs are simple, without unusual angles, long hair, or tufts. The lateral propodeal angle is moderately blunt, and somewhat concave along the posterior margin.

T-I is broader than long, rounded laterally, and not divided anteriorly into strong lobes. T-II has a median longitudinal ridge. T-III has a distinct pit row, a slight prepit bulge in females, and four posterior teeth. S-II dark spots are rounded and separated. S-IV is concealed in females, nearly so in male. Male terminalia: S-VIII triangular, gonocoxa triangular but not digitate or spinose, volsellar elements slender, digitus nearly as long as cuspis, and aedeagus rather slender.

In other parts of the genus, each of the above features may be different, and in some cases it is characteristic of a species group (most of the characters are figured). The differences are discussed below with examples.

In some species, the flagellum may be considerably broadened (antennata); or mostly orange in males (capitalis, fulvicornis, gussakovskii); or both sexes (olgae); or male F-I and/or II may be short (maculicornis group, delicatula group, antennalis group, etc.). The antennal bases may be almost touching (nearly all of pallidicornis group). The subantennal space may be 2 MOD or more (pallidicornis group, nasuta). The scapal basin is frequently microridged (maindroni, taczanovskii, splendens, wahlbergi, etc.). The malar space may be quite short (maculicornis) or quite long (delicatula). TFC may be absent (amneris), partial (splendent), branched posteriorly to define a mid ocellar area (westermanni), essentially double (antennata), parenthesis-like (wahlbergi), projecting (grandis), or welt-like (alternans). Ocelli may be as little as 1 MOD from the eyes (maindroni), and may be lidded (westermanni, stilboides, smaragdula groups). LID is subject to great variation but is a relatively good species character. It is usually broader in females, and may be twice an eye diameter (ehrenbergi), or only a little more than one diameter (nasuta). The genal carina may nearly touch the eye (propria, bihamata, pallidicornis groups) or may be absent (ehrenbergi female, ugandae). The preoccipital ridge and hook are almost universal but may be absent (ehrenbergi).

T-I may be nearly as long as broad (delicatula) or with anterior margin lobate (subsinuata). T-II may lack a median longitudinal carina (sabulosa group, etc.). T-III rarely has the pit row obsolete (atrypa), a prepit bulge is sometimes absent (sabulosa); the number of T-III posterior teeth may be 0 (hydropica, millenaris groups, etc.), two (bihamata group, etc.), six (smaragdula group, oculata group), teeth or angles of lateral edge one on each side for a total of four (rufitarsis and pulchella groups), one on each side for a total of six (lincea, heymonsi, splendens, wahlbergi, and longicollis groups), or two on each side for a total of eight (decemdentata group). S-IV is rarely completely exposed (varia males). S-VIII may be attenuate posteriorly (antennalis, conica, grandis), or broadly rounded posteriorly (facialis, westermanni, cuprata). The gonocoxa may be attenuate posteriorly (pulchella, inaequalis, extensa, conica, varia, etc.), or with a strong inner lobe (angolensis, aureomarginata, westermanni, astralia, varidens). The digitus may be short (elegans), medially foliaceous (capitalis), or medially microdentate (eximia). The cuspis may be broad (longicollis), narrow (smaragdula), or claviform (extensa). The aedeagus may be expanded basally (nisseri), expanded apically (coloradica), or unusually serrate (capitalis).

Linsenmaier (1959a) was the first chrysidid worker to formalize species groups. Within Chrysis, as treated herein, he established 52 groups, including a few monotypic subgenera. These groups were all in the Old World except for carinata (=grandis group) from South America. Linsenmaier presented a key to 33 of his groups, mostly from the Palearctic Region, and commented on characteristics of the others. In general we have followed his arrangement and nomenclature. However, where the names seem inappropriate because of homonymy (carinata and clypeata groups) or synonymy (incisa and bucculenta groups), we have made changes. In a few cases we have combined groups (scutellaris with comparata, leachii with succincta, emarginatula with elegans, gracillima with varidens, fasciata with smaragdula). Some groups or parts of groups have been removed to other genera (part of versicolor to Spintharina, and austriaca, dichroa, and radians to Chrysura). Some of his subgeneric concepts we have treated as genera: Chrysura, Spintharina, Trichryris, Chrysidea, Pentachrysis. Others have been synonymized: Octochrysis, Platycelia, Eurychrysis, Pseudotetrachrysis, Cornuchrysis, and Chrysogona. Although these names are not used, we have included many of the categories they represent as species groups. The total now comes to 70. We have tried to base our groupings on all available characters including dissected male terminalia. Many of our differences with Linsenmaier would probably not have occurred if he had studied male terminalia more closely. Although he gave nearly 200 figures, the differences are for the most part obscure, and S-VIII was not considered.

We present separate keys to Old World and New World species groups, followed by group diagnoses. In the five cases where groups occur in both geographical areas (comparata, angolensis, ignita, smaragdula, succincta), the diagnoses are given only in the Old World section.

In the combined and alphabetical synonymic list the appropriate species group is indicated where possible. However, many species are unassigned, either because we have not seen identified specimens, or because material examined was inadequate. It is obvious that when more material becomes available, additional species groups will need to be characterized.

Some Chrysis species names have had to be changed from those commonly given, either because of synonymy resulting from examination of types, or from homonymy which has been previously unrecognized or ignored. The following are some of the more important changes. Others can be found in the species list.

Chrysis parasitize a wide variety of wasps and bees in the families Sphecidae, Eumenidae, Megachilidae, and Anthophoridae.