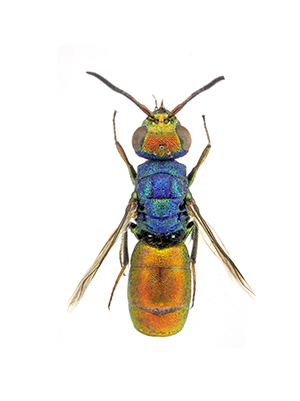 All known hosts are bees of the family Megachilidae (Hicks 1934). Most records are of the widespread and essentially Holarctic genus Osmia (Linsenmaier 1959a, Krombein 1967), which ordinarily nest in decaying logs or in the ground. Horning and Bohart (in Bohart and Kimsey) (1982) recorded additional twig-nesting host genera for sagmatis, a relatively abundant species in western North America. These were Ashmeadiella, Chelostoma, Hoplitis, Antkocopa, and Proteriades.

Chrysura is the second largest genus in the Chrysidini. An important diagnostic feature is the relatively flat face without transverse microridging, but sometimes with a little medial microreticulation. In addition, there is no TFC, no teeth on T-III, and the lateral hollow on the pronotum is weak or only slightly indicated. We have divided the genus into five species groups, in four of which (radians, dichroa, cuprea, candens) male F-II-V (especially F-II-IV) are asymmetrical (knobby) beneath. Linsenmaier (1959a) included Chrysura in Chrysis and separated the first three groups from the austriaca group on the base of the male antennae. Since the ‘knobby’ antennal character crops up in several Chrysis groups, as well as Spintharina and Ceratochrysis, we do not place as much weight on it as did Linsenmaier. Further­more, as an intergrade we have a male cirtana (determined by Mocsáry) in which F-II-V are slightly asymmetrical. This species, along with candens, was put in the austriaca group by Linsenmaier, but we place them in a separate candens group. The 10 Nearctic species of Chrysura are all in the radians group. Although they do not have the red abdomen found in many of the Palearctic species, and the metanotum is not produced, we do not think this is justification for a separate group. A key to these species was given by Horning and Bohart (in Bohart and Kimsey 1982). The name of the largest group of Chrysura was informally proposed as pustulosa by Linsenmaier (1959a). Since pustulosa Abeille (1878) has been synonymized under radians Harris (1776) by Morgan (1984), we are now using radians as the name for the group Altogether, we have been able to study authenticated specimens (mainly types) of about 80 percent of the species we have listed. However, our studies were made at different times and places, so that direct comparisons were not possible. Therefore, there may well be some undetected synonymy in the species studied and there is likely to be some additional synonymy among those which we have not been able to see.