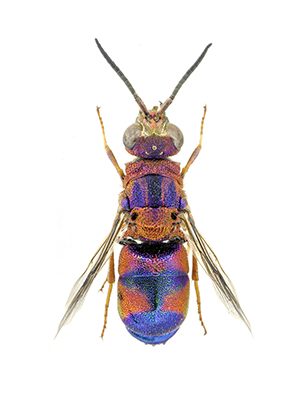 The majority of Euchroeus occur in the western Palearctic Region, and three are Afrotropical.

Three related genera, Euchroeus, Spinolia, and Pseudochrysis, share the widely open fore wing marginal cell, together with a well-marked scrobal sulcus. Also, the long and somewhat bulging subantennal space creates a special look to the clypeus. Euchroeus and its relatives, but particularly the Former, are often highly coloured. Females tend to be brassy, coppery pink, or pinkish green. Males are green, blue, of purple. female torrida are remarkably coloured, with a dark blue to green dorsum and brilliant coppery and green face and venter. Two other traits that frequently occur in this genus are the presence of dense long silky pubescence on the venter, and white or translucent yellowish colour on the mandibles, legs, and often on T-III apex. Along with the pale markings, the bispinose mesopleuron below the scrobal sulcus distinguishes Euchroeus from its two related genera. On the other hand, the multiple irregular teeth on the T-III apex are much like those on Spinolia stchurovskyi. Additionally, some Euchroeus (singularis and zarudniana) have only two apicomedial teeth and two lateral teeth on the T-III edge.

The name Euchroeus was considered synonym of Brugmoia by Kimsey & Bohart (1990) « The commonly used name for this genus, Euchroeus, is a generic synonym of Chrysis, based on examination of the type species, purpurata Fabricius (Kimsey 1988b) ». Then, Brugmoia was suppressed by the International Commission of Zoological Nomenclature: