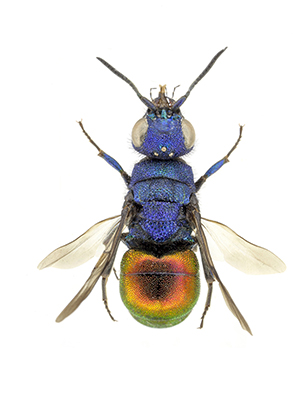 Few hosts have been reported for Hedychrum but all are Sphecidae in the subfamily Philanthinae. Grandi (1961) gave Cerceris sabulosa Panzer as the host of gerstaeckeri, and in North America Byers (1978) reared an undetermined species of Hedychrum from Cerceris halone Banks. Hedychrum simile was observed by Tsuneki (1970a) leaving the nest of Cerceris arenaria L. Abeille (1877) reported rearing longicolle and sculpturatum from the cells of Halictus but this record is questionable.

The Eastern Hemisphere has the highest diversity of Hedychrum, with 65 species in the Palearctic Region, 47 in Africa south of the Sahara, 4 in Madagascar, and 14 Oriental. In the Western Hemisphere there are 11 North American species and 5 South American.

Hedychrum comprises a distinctive and closely related group of species, characterized by the mid and hind tibial pits, tooth at the base of the oral fossa, enlarged hind femur, modified female S-III, and special propodeal sculpture. Coloration is one of the most useful diagnostic features for species distinctions. The presence and extent of blue or green on S-II and -III is of critical importance. Males tend to have more extensive metallic coloration on S-II and -III. Species from the Americas and Afrotropical Region tend to be entirely blue or green, except cupricolle which has the pronotum, scutum, scutellum, and metanotum bright green to brassy, and contrasting strongly with the rest of the body. Palearctic species also tend to be bicoloured, but with a blue, green, or purple thorax, and brassy to coppery abdomen. Females of many of these, including nobile, aureicolle, longiolle, and chalybaeum, may have a strikingly bicoloured thorax similar to that of cupricolle. The shape and presence or absence of mid and hind tibial pits are also important characters. Finally, the shape or absence of the apicomedial tooth on the female S-III distinguishes many species.

This is a diverse but structurally conservative genus. There are few differences in lengths of flagellar articles, facial dimensions, or other sculptural features. Even the lengths of the clypeus (subantennal distance) or malar space vary only rarely. H. coelestinum can be recognized immediately by the unusually long clypeus.

Unlike most other elampines, sex determination in Hedychrum is relatively simple. Females have the modified S-III with sub-basal sulci and apicomedial tooth. The anterior surface of the hind femur is reticulate and non-metallic brown in males, and shiny green or blue in females. In addition, many Palearctic species have much more brightly coloured females than males. In the species listed above with a bicoloured thorax in females, the male thorax is entirely blue, green, or purple.