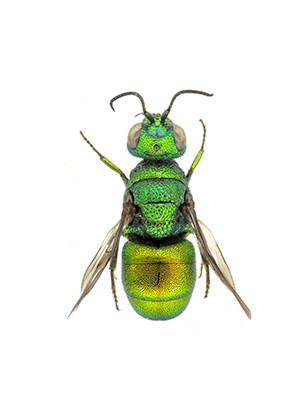 Species occur in all zoogeographic regions, with the majority in the Palearctic. There are 67 Palearctic species, 8 Nearctic, 7 Neotropical, 3 Asian, 1 in Australia, 1 in Madagascar, and 4 in Africa south of the Sahara.

A number of Palearctic species are sexually dimorphic, particularly amoenula and fervida, which are two of the most commonly collected species. In these species males tend to be blue and green, at least on the thorax, and females coppery red.

The name gloriosa F. has been used for years for one of the commonest European species, amoenula. Surprisingly, upon examining the type, we discovered that gloriosa is actually a synonym of Pseudomalus auratus and not a species of Holopyga (Kimsey 1988b).

Linsenmaier (1987) described the genus Chamaeholopyga based on the new species parvicornis Linsenmaier (1987). We have been unable to see this species and therefore cannot render judgment on the placement of this group.