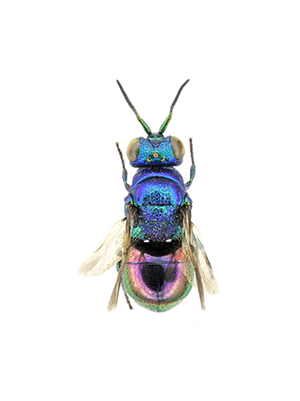 These wasps are nest parasites of the sphecid subfamily Pemphredoninae. Because Pseudomalus females have never been observed at the nest entrances of their hosts, the suggestion is that Pseudomalus species place their eggs on the body of aphids (Homoptera) before they are collected by Pemphredoninae (Veenendaal, 2011).

Pseudomalus occurs in the Holarctic Region, with a disproportionately large number from southern USSR.

Pseudomalus is the largest of the genera split from Omalus in the broad sense, with 42 species. The most distinctive feature of this genus is the pattern of scutal punctation, with the punctures clumped posteriorly between the notauli. Unfortunately, this area is often obliterated when the specimen is pinned. Additional diagnostic features are the malar space horizontally bisected by the genal carina, scutellar anterior margin unmodified, mesopleuron strongly projecting laterally at the juncture of the omaulus and scrobal carina and verticaulus, and T-III usually with a deep apicomedial notch.

Colour and differences in sculpturing are the characters most commonly used to distinguish species. The shape of the apical margin and notch of T-III are particularly useful. Most species have the thorax and abdomen concolorous. However, some Palearctic ones, including auratus, hirtus, and bogdanovi, have the thorax purple, blue, or green, and the terga bright brassy or coppery.

This genus needs extensive revision. Species distinctions are obscure in a number of instances and badly need re-examination.

As with the other genera split from Omalus, the sexes are difficult to separate without exserting the genitalia.