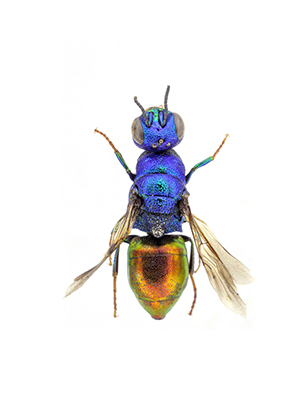 This genus is found in most zoogeographic areas except the Australian and Oriental Regions. There are 8 species in North America, 3 neotropical ones, 5 African and 41 in the Palearctic Region.

Elampus can be distinguished by the mucronate metanotum, T-III produced into an apical snout-like structure, scutum evenly and often densely punctate, female with a short and even genal fringe, the fore wing with medial vein strongly arched, and stigma short and apically rounded.

Most closely related to the Omalus line, both have the same wing venation, the medial cell asetose, a strongly carinate mesopleuron, and posteriorly angulate head. In many species the head is almost lenticular. There are several Philoctetes that resemble Elampus, having an apical snout on T-III and a mucronate metanotum.

Elampus consists of 63 closely related species. Species distinctions are based on facial and flagellar dimensions, shape of the fore femur, and modifications of T-III. The shape of the apical snout on T-III and the extent of the apical membrane is particularly useful. Colour is important but must be used with some caution. It is not uncommon to see both green and brassy or coppery individuals in the same species. In several species, including viridis, the snout membrane is nearly circular without emargination. One species, bidens, lacks a true snout, and the apex of T-III is bent under with two submedial teeth. Several species, including guillarmodi, bidens, and scutellaris, have the fore femur strongly elbowed. Many Palearctic species tend to be bicoloured, with the head and thorax blue, green, or purple and the abdomen brassy or coppery red. In a few species, including versicolor and namibiensis, the snout membrane is red.

There is a certain amount of sexual dimorphism in this group. The most obvious difference is the genal fringe always found in females. Males only have a few long irregularly spaced setae in the same position. Females also tend to be more extremely modified than males. If the male fore femur is sub-basally elbowed in a species, the female fore femur probably has an elongate sub-basal tooth. This dimorphism has resulted in a certain amount of synonymy, with conspecific males and females given different names.

There has been no overall treatment of Elampus, only a number of regional revisions, including: North America (Bohart and Kimsey, 1982, Huber and Pengelly, 1978), Afrotropical species (Kimsey 1988a), and those of Europe (Linsenmaier 1959a, b, 1987).